The Jumbo range has emerged organically. I began playing around with the idea of printing on clay near to the beginning of 2012, working with a small group of pottery students we began cutting sponge, thick slabs of upholstery sponge proved to be very useful. I bought finely pointed sharp little craft knives, and had fun cutting into the sponge. At first I cut naturalistic shapes, leaves, butterflies, and flower petals. Using coloured slips I dipped my sponges and pressed the shapes against the clay, squishing, and blotching were my first problems. I learnt how much slip to leave on  the sponge before pressing it to the surface of the clay and began to become adept at the technique.

Cut to the ellies. I threw about 2 dozen tall mugs, an elegant shape and needed a really lovely motif for the mug. I planned to use a sponge print, and became inspired by the image of an elephant from a collage which I had made yonks ago. So I cut the sponge into the ellie form, pressed it into some black slip and printed it out on a large sheet of paper, my first trial. The shape of the ellie was just right, so the next step was a print onto one of the mugs. I was able to fit two eles, one holding the others tail, as they perambulated around the mug. The ellies looked so cheerful, so I threw plates and bowls in quick succession all to be decorated by these amazing creatures. I hope you share my enthusiasm for this new ware from The Potter's Yard, we have already added a biscuit jar with an elephant modelled on top of the lid and a tea pot. The response at Showcase was very encouraging with some orders being placed, you can order online!
Posted by Unknown at 19:10 No comments:

We had a great time at Showcase Craft Expo last week! So many amazing craft workers to be seen, and it's a credit to the organisers who put in such hard work to make it happen. It was the first outing for our new Jumbo Range as well - doesn't it look great?! 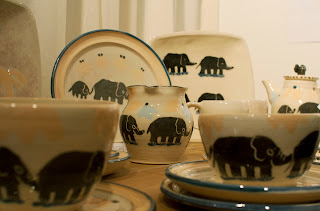 We are proud to rank on Savers Inn, a Tourist Money Saving and Inn site, with a range of pages including Cheap B and B Killarney, Tullow B and B, Dunleer Inn and Bed and Breakfast UK listings

Shop online or enroll in a workshop.